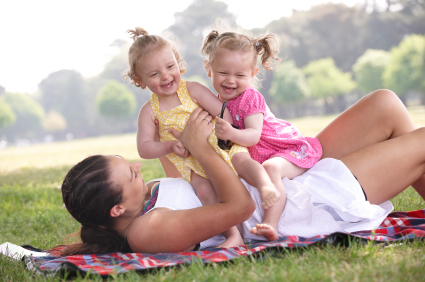 spend more time at home.  The Australian Institute of Family Studies interviewed about 4000 children aged between 10 and 11 on their parents' work habits.

About 35 per cent of these children thought their dads worked too much, while 27 per cent said the same about their mothers. The study found parents were also feeling the pressure, with 23 per cent of mothers saying that work made family time less enjoyable and more pressured. The research is from the Longitudinal Study of Australian Children and released as part of 2012 National Families Week.

Townsville parenting expert and child psychologist Nicole Pierotti said children were affected, not only by the hours their parents spent working, but the spillover of work-related worry into family time. `The study found that the quality of time we spend with our kids is less, even when we do have family time,'' she said. `Parents just don't have the time to sit there and listen while their child chats for 30 minutes about what happened at school today . `So basically they lose touch, emotionally, from their kids.''  Ms Pierotti is a mother-of-three and said getting the balance right was important because children relied on their mums and dads for advice and support. `We know that losing touch with our kids affects them in the long term with the relationships that they may have in the future.

'' Townsville mother-of-two Deborah Latouf owns a successful toy store at Domain Central while her husband, Sean, is a cardiologist, which makes family time rare and very precious. `To be honest I don't think I'm managing the work/life balance all that well at the moment,'' she said. `But I can put it in perspective because at the end of the day, it's my husband that's dealing with the real emergencies. `No matter what happens my job never takes priority over somebody's heart attack and so for us it can be a real juggle because it usually falls back on me.'' Ms Latouf said finding enough family time was always a challenge but she tried to make sure her husband spent quality time with their children, Connor, 9, and Reilly, 7. `Sean gets absorbed in his work and his patients demand a lot of his time but I try and push the kids into his busy schedule so they get time with him too,'' she said. `It's certainly a norm for our kids that both parents work. `But I make it a priority to do things like attend my seven-year-old's reading group once a week at school.''
Ms Pierotti also said the study showed that finding a way of meeting the demands of paid work, as well as taking care of children, was proving difficult for many parents.
She said it underlined the need for workplaces to adopt more flexible approaches to allow their employees to enjoy family life. `It's probably ideal to have only one parent working full-time. `And to have the other parent work on a part-time basis. `The issue is not that parents work but how attentive parents are with their kids when they come home,'' she said.

* Minimise the amount of out-of-school care you use. If you use before-school care, try not to use after-school care.
* Establish family routines and traditions. It could be a weekly family night or Sunday morning brunch.
* Limit kids' activities. Just say no to overscheduling. Limit your kids to two or three after-school activities a week. The other days should be time spent with mum or dad, whether it's kicking the ball around the backyard or playing cards.
* Commit to spending one hour with your children, at least once or twice a week.
* The best way to help your child excel in school while spending time with them is to help them with their homework.
* Stop working on the weekend and go somewhere with dodgy phone coverage for a night or two.