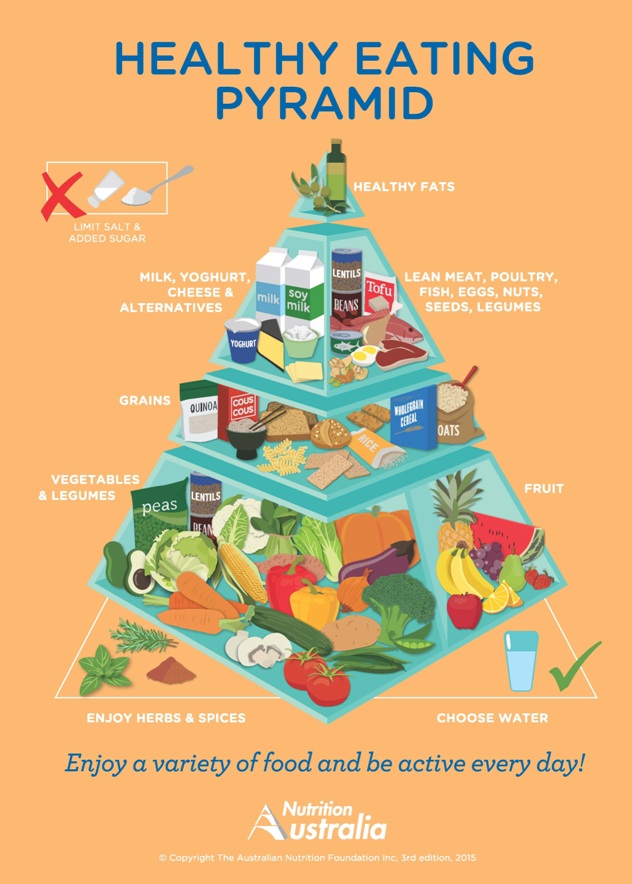 Nutrition Australia has updated its iconic Healthy Eating Pyramid for the first time in 15 years in an effort to combat growing nutrition confusion and risky fad diets.

The new pyramid provides clearer advice on the five core food groups we should aim to eat every day for a healthy balanced diet, consistent with the latest Australian Dietary Guidelines.

“The new Pyramid cuts through the misleading information and fad diets that are getting so much attention, and provides Australians with a credible, flexible and realistic guide to eating well,” said Ms Hancock.

“Unfortunately we know that most Australians don’t eat what is recommended by the Pyramid and the Dietary Guidelines, and this is why we’re seeing such high rates of diet-related diseases.

“The latest health survey data shows that the average Australian is getting more than a third of their daily energy intake from junk foods, while less than seven per cent of people eat enough vegetables and only half of us eat enough fruit,“ said Ms Hancock.

“We want to get the message across that for most people the simplest way to eat healthier is to cut down on junk food and sugary drinks and to eat mostly from the core food groups – especially to eat more fruit and vegetables,” said Ms Hancock.

“You don’t need to follow a restrictive diet or cut out entire food groups to eat healthier, because this can also lead to other issues such as yoyo dieting or nutrient deficiencies.”

The new Pyramid separates each layer into the five specific food groups, to provide clearer information about how much each one contributes to a balanced diet. Plant-based foods still take up the largest amount of space, with fruit, vegetables and legumes emphasised in the bottom layer, followed by grain foods, then moderate amounts of dairy and protein foods (lean meat, poultry, fish, eggs, nuts, seeds and legumes) and finally small amounts of healthy fats. It also encourages drinking water, limiting salt and added sugar, and to enjoy herbs and spices to flavour foods without using salt.

Australia’s changing dietary patterns and cultural diversity are also reflected in the new pyramid, with a wider range of foods included within each group.

“For instance, the grains food group now includes quinoa and soba noodles and the dairy section includes soy milk to represent calcium-fortified dairy alternatives. As well as being a reflection of changing dietary patterns, including a wider range of foods is an important way to encourage greater variety in the diet.”

Nutrition Australia’s consultation with educators and health professionals shows the Pyramid is particularly effective with children and people with low literacy levels, as it visually communicates the amounts each food group contributes to a balanced diet, from more to less.

The Healthy Eating Pyramid is a simple, visual guide to the types and proportions of foods we should eat every day for good heath, based on the Austraian Dietary Guidelines.

The foundation layers contain the 3 plant-based food groups: Fruit, vegetables and legumes, and grains. These foods make up the largest part of the Pyramid because they shuld make up the lagrest part of what we eat.Plant foods contain a wide variety of nutrients like vitamins, minerals and antioxidants. They are also the main source of carbohydrates and fibre in our diet.

The midle layer includes the milk, yoghurt, cheese & alternatives which primarily provides us with calcium and protein, plus other vitamins and minerals.

As well as the lean meat, poultry, fish, eggs, nuts, seeds, legumes food group, which is are our main sources of protein, as well as providing other nutrients, including iodine, iron, zinc, B12 vitamins and healthy fats.

Right click on the below pyramid and select download picture.  Now print the pyramid and  place on your fridge OR cork board so the kids can see it!!!