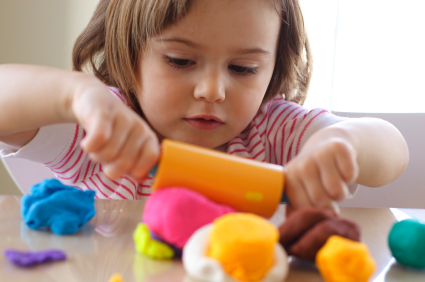 My four year old has imaginary friends. She talks to, and bosses around, one in particular who gets the blame when something goes wrong. Is this normal? Or is her active imagination a symptom of loneliness, perhaps due to the fact that she is an only child?

Don't worry, your child  is not only normal, she's also very creative. Having an imaginary friend is part of “imaginative play” and quite common between 3 – 5 years of age.  Researchers at Queen’s University, Ontario, Canada say that between 40 and 65 percent of all children have imaginary friends at some point during childhood.

Her growing imagination creates this ficititious friend.  Kids can scold, praise, blame, remind their friend, they can work through a range of different emotions and act it out, just like imaginary play of having a tea party. It also helps your child to learn and figure out language. In fact kids with imaginary friends usually have a richer vocab than other kids their age.

And yes it’s quite common for the ‘friend’ to get the blame when things go wrong.  If she blames her friend, don’t make a big deal of it, just move on past, and remind her of the rules, or help her clean up a spill etc.  I’d avoid the  conversation that tries to get her to admit you know that there’s no way her friend did it,  just the same as I’d avoid joining in the conversation with her imaginary friend, or  invite, or participate in her conversations.  Think about it this way, if you include the ‘friend’ into your house then it’s like to continue for longer.