My 15 month old refuses to use a sippy cup only drinking water from a bottle (that I hold for her). How do I get her to switch to a sippy cup and get her to use it on her own. I need her to start using a sippy cup because she's about to start daycare a few days a week. 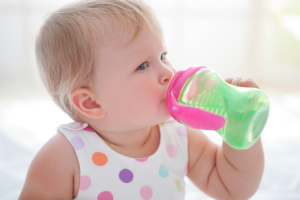 This is a common delimina for parents and happens when your toddler doesn’t progress fast enough to the sippy cup from the bottle.  Then they become attached and refuse to drink from anything but a bottle.  The only way out of this situation is really to make the break.  You as a parent have two options the first is to ‘just do it’;  the bottles get given to friends so you are not tempted to backpedal and the sippy cup is the only option.

Your daughter is not going to like the change in situation and will protest.  Loudly and dramatically and she has stamina.  Usually more than you do!  However keep cool and remember that this isn’t actually hurting her and is where she needs to be drinking from a sippy cup then cup.  The fact that you have progressed from milk to water is a plus in your situation.

Tell her before you start that she no longer needs the bottles, I’m sure you’ve done this already.  Keep telling her what you expect of her and how you want her to drink her water.  No more references to bottles etc after you start.

Any protesting, let it go.  Be calm and not interested.  Offer her water in a sippy cup if she refuses which is her likely response, leave the cup and tell her when she wants a drink there it is.  Then move on and distract yourself.  Ignore all dramatics and sound effects.  She will increase the drama and volumne as she has learnt that eventually this works and you can’t stand it anymore and give her the sippy cup.  By the end of a week, the dramatics will be long gone and she will  be drinking from the sippy cup.

If you find this approach too difficult for you, option two is to slowly change the bottle to a cup.  This option only works if you have a bottle that you can add the handles onto and then the teat can be changed to a sippy teat rather than a sucking teat, Aventi is one brand that is adaptable and you can buy the bits n pieces to change.  This method however is a long process but will get you there in the end.  If you do not have an adaptable bottle, I wouldn’t recommend going and buying one just for the progression to a sippy cup.

Lastly you can just go straight to a cup you do not have to do the sippy cup stage as your end aim is to have your daughter drinking from a cup.  Just practice in the bath or outside so save on cleaning up.

As for holding it for her, you need to encourage her to be independent and she can certainly sit on your lap etc to have her cuddle but she needs to hold it herself.  Refuse to be drawn into this game.